Previously we have explored the parts of the brain where anxious thoughts are created and processed into physical responses; we have also seen the different anxiety pathways, but to understand how all this works, we need to understand the chemical processes that occur.

The brain is made up of billions of connected cells that form circuits; these circuits hold your memories, produce feelings, and initiate all of your actions. 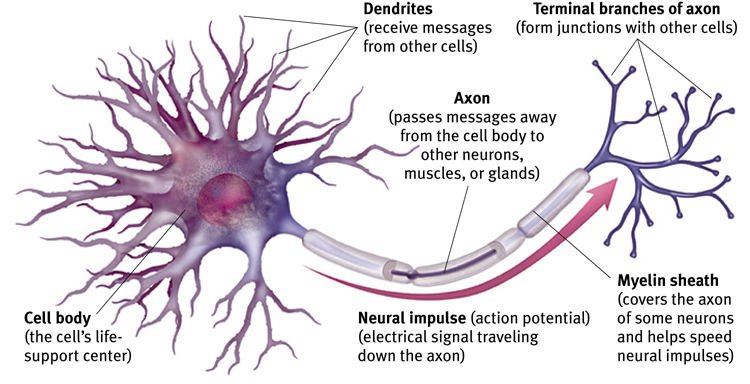 NEURONS – Are the basic building blocks of the brain.

NEUROPLACISITY – is the neuron’s ability to change itself and its responses, based on your experiences.

“Understanding how neurons unction will help you learn strategies that will allow you to rewire the circuits in your brain that activate anxiety.”

The basic parts of a neuron are as follows:

The Cell Body – This contains machinery of the cell, including the genetic material that directs the building of the cell, as the diagram above shows, it is the cell’s life support center.

Dendrites – These come out of the cell’s body and look like the branches of a tree.  They are the essential part of the communication system between neurons.  They reach out to receive messages, which travel between neurons by means of a chemical process.

Axons – The dendrites receive messages from these although they do not actually touch.  Axons send their messages by releasing chemicals called neurotransmitters into the space between the axon and the dendrites.

Synapse – Is the space between the axon and the dendrites.

Axon Terminal – Is located at the end of the Axon.  These are tiny sacs which hold neurotransmitters in preparation for sending chemical messages.

Receptor Sites – Neurotransmitters connect to these, which are located on the dendrites.  These connect to other neurons similar to putting a key in a lock.

FIRING – is the reaction of the neuron caused by the neurotransmitter connecting with the receptor site.  It is when a positive charge travels from the receiving dendrites of a neuron, through the cell body, and all the way to axons at the other end.  This causes the axon to release neurotransmitters from its axon terminals transmitting the chemical message to yet another neuron, passing the message on.

Every sensation you experience is processed in your brain by neurons; sights, sounds, smells, everything our senses take it is translated into electrical signals within neurons, and these signals are then communicated to other neurons via neurotransmitters.

I know this is getting a bit deep into science and boring, but trust me, it is worth knowing this stuff because it really helps you to understand what is causing your anxiety.

In the next blog we will see how the neurons create circuits.  I can sense your excitement building already…..

Referenced: Rewire Your Anxious Brain – how to use the neuroscience of fear to end anxiety, panic & worry.  By Catherine M. Pittman, PhD & Elizabeth M. Karle, MLIS

2 thoughts on “Anxiety and the Brain, Part 5: Neurons.”