As we have seen previously, the brain is constantly working to keep you safe from danger and harm; this is great up until the point when the anxiety is so bad that the brain goes into safety overdrive and your feel paralysed; it is as if your brain has built a prison to keep you locked away in.

While the brain thinks it is helping, being locked in this cell actually makes you feel trapped; you can imagine, and almost touch the metal bars, the solid concrete or brick walls, see the little window that is too high for you to look out of and only lets in a small amount of light.

Getting out of this mental prison seems impossible, after all, the brain has taken the key and dropped it down the drain never to be seen again; and of course, there’s no spare.  So how do you escape?

I wish I could give you a simple answer, but I can’t.  Wouldn’t it be great if someone could come along and blow the lock off the cell door, setting you free?

There is hope, people do break out of their mental prisons; it just takes work, focus, time and patience.  It sounds so simple when you put it like that, doesn’t it?

Just imagine Alcatraz; it was designed and heralded as the prison no one could ever escape from, and on the whole that was true.  There were numerous attempts but all failed; that is with the exception of one attempt, where three men escaped and disappeared.  Did they make it or did they perish, no one really knows.

The location certainly made escaping from Alcatraz appear impossible, but how much of it was psychological?  Did many not try simply because they accepted what they were told and believed it was impossible?  The currents in San Francisco Bay are deadly so how much doubt was there about physical ability?

If you look at the lengths that the three who did ‘escape’ went to, it shows an immense level of patience and planning as well as mental fortitude.  This is the sort of level you need to go to in order to escape the anxious prison; you have to plan, but also be flexible to deal with any changes (expected or unexpected), you need patience, determination and a strong will.

One of the main obstacles to escaping the anxious prison is panic.  Panic is horrible, it can paralyse you, and makes the idea of getting well feel like an impossible mission; you might as well try and climb Everest in flip flops!

The first thing is to try and get some control of the panic and the fear, one of the best ways to do this is to take positive action.  I know this is easier said than done; knowing what you need to do is the easy bit; putting it into action is where you start to hit obstacles.  The trick is to take it one step at a time.

You all know the saying:

“The journey of a thousand miles begins with small steps.” – Chinese Proverb

It is true, you have to break it down to the smallest of steps, remember, your brain has gone into overdrive to keep you safe.  Imagine someone is giving you a bear hug to protect you, and won’t let go even though they are suffocating you.  You can’t move, but you can slowly start to convince them you are ok and they can start to loosen their grip; how good will it feel when they let go fully?

Another obstacle, or shall we call it a challenge is that you have to decide when the time is right for you to start the journey.  It is human nature for people to want to help fix things, and it is also easy to expect someone else to have all the answers.

The thing to remember is that it is your prison, created by your mind, based on your experiences; can you really expect someone else to have the answers to unlock the cell door? 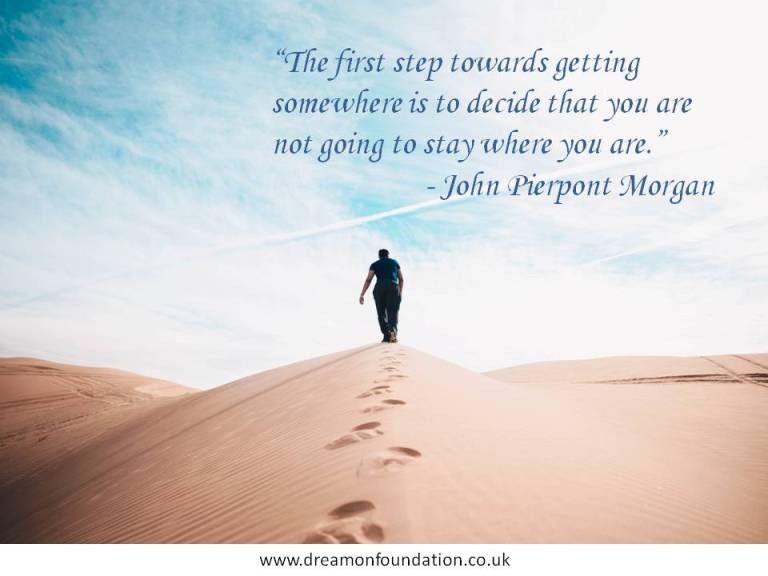 The great news is that there are people who can help, it’s about finding the therapy or treatment that works for you, and this takes a bit of work on your part.

When I was in the depths of anxiety, depression and self medicating with alcohol I felt there was no hope, no one understood me and no one was helping me.  I knew the negative affect it was having on Kim and myself however, looking back I don’t think I had a full understanding of the amount of pain and frustration I put Kim through, and how helpless she must have felt because nothing she did or said made any difference.

I knew in my mind what I needed to do, but could not take the action I needed to.  Eventually something clicked; I didn’t like who I was becoming, and I ‘wanted’ to change.  The first step was to do something about the alcohol (I think it was Kim saying I had a gut like Homer Simpson that really did the trick!) that’s when I got on the Internet and found ASCA, and it was one of the best things I ever did.

As much as I wanted her to, the therapist, Donna, could not click her fingers, wave a magic wand and make my problems go away (where’s Disney when you need him?), but slowly I got better, and that is where patience comes in.  There is no speedy way to recovery, and anyone who tells you there is probably doesn’t have a full grasp of the idea.

What this highlights is the importance of you being ready to take the necessary action; YOU have to take the first step.  It’s ok to get someone to hold your hand, make some calls for you, but at the end of the day you have to do the walking.

Once you start, the journey will be full of highs and lows and that is where perseverance comes into play, it really is about picking yourself up, dusting yourself off and trying again.

I am still on my journey and have lost count of the number of times I have had to pick myself up and start again.  Kim and some very close friends have been like rocks and stabilisers, supporting me along the way, but at the end of the day I have to get up each morning and get out of bed.

There are still some bad days, those days when I just feel so low that I go back to bed and hide away.  I also still have days when anxiety paralyses me and anger overwhelms me.

A couple of weeks ago I had a really bad day; a couple of things happened that caused me to have a panic attack and the only way I could deal with it was to go to bed.  I would have stayed there all day and night, but I had college in the evening.  I wanted to go, because I felt it was important not to miss another session.  I don’t know how, but I made it in.

Whilst I was there in body, my mind had pretty much shut down; I told the group that I just wanted to be invisible.  I can’t tell you much of what was discussed, and any of the handouts might as well have been written in a foreign language for all the sense I could make of them and I felt really depressed.

Last week I was chatting to one of my colleagues in the group about that day, and he said that the most important thing was that I made it to the college when it would have been easier for me give into the anxiety and stay at home.  This made me feel better about what had happened, and I realised that in order to have any control over anxiety, you have to try as hard as you can to fight back, and not let it take control.

We will all make mistakes and we will all fall over now and then, but it is how we deal with those challenges and set-backs that matters, do we let the anxiety and fear hold us back, or do we keep surging ahead?

The most important thing to remember is to be kind to yourself, and don’t judge yourself harshly while you are on this journey.  .

Going to be announcing my first big challenge of the year on Friday; all I can tell you is, it’s going to take lots of courage and determination and it’s for a great cause @mindcharity @mindblmk @mindinmidherts_ @hertfordshiremind #runningmotivation #runningismytherapy #runnersofinstagram #mentalhealthawareness #anxiety #depression #moreformarch
The garden is starting to come to life 🌼 #andbreathe #mindfulness #mentalhealthawareness #gardenlife #flowers #daffodils #gardeningismytherapy
Misty mornings. #andbreathe #mindfulness #mentalhealthawareness #anxiety #depression #walkingforhealth #exerciseformentalhealth
Smashed the @raceatyourpace 150 mile running target this month, with a total of 174.6 miles, all in aid of @mindcharity @mindblmk @mindinmidherts_ @hertfordshiremind