Towards the end of last year a friend mentioned that he was running the Milton Keynes Marathon, and this got me thinking.

I needed a reason to do the races, it wasn’t enough to just do them, get the medal and wait for the next one, there had to be a bigger purpose, and that’s when I thought about raising money for Mind and that was when ‘Adventures of an Anxious Mind’ was born.  I also thought that I could use the experiences to help and inspire other people, and to raise awareness of mental health issues; it is this part that drives me the most.

I decided to sign up for a number of runs this year, which included the Milton Keynes Marathon.

The training now had to get serious, so in January I signed up to Race At Your Pace again and did another 100 miles, this time I aimed to do fewer, but longer runs than I had in October. 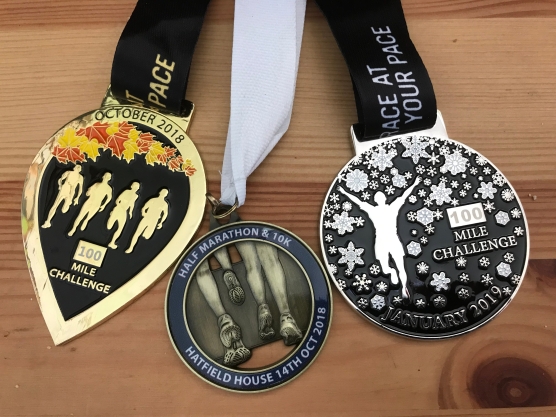 During February I took it easy because I realised that I was running too much and felt tired, plus the weather was bloody awful.

I had no real idea how to train for a marathon, so I tried looking on-line for a training plan.  There are loads but they made me feel anxious because they are obviously built around a set routine, and that sort of fixed timing really stresses me out.  In the end I took the basics of a training plan and made it flexible enough for me and my mind.

Again the training had its highs and lows; I really struggled to get my head around running for over four hours and couldn’t see how it was even possible.  My legs were also of the opinion that it was a stupid idea.  A few weeks before the big day I hit rock bottom and the old feelings of failing and of being useless, came knocking at the door.  I was in a deep rut and was struggling to get out of it.  I couldn’t motivate myself.

Kim was really worried and looking back, rightly so.  We sat down and had an honest conversation about whether doing the race was a good idea and if it was just too big a challenge for me at that time.  It wasn’t that she didn’t believe that I could get round, she was worried that if I did not finish it in the way I thought I should that I would see it as a failure.  She knows me so well….

She suggested I do it the following year, once I had a couple of half marathons under my belt, but this was not an option for me because that really would have felt like failing.

In my mind it was as if people were telling me not to do it because I had a similar conversation with my counsellor; for a while this got me down, but I decided that I needed to prove to them and to myself that I could do it.  I said that the most important thing was to get round, and I didn’t care if I walked part of it.  Was this really true, or was I kidding myself?  Maybe a bit of both.

I was under no illusion that it would be tough, after all I had struggled to run half marathon distance so I think my mind was resolved to walking at some point, and after all, I was pretty sure I wasn’t going to be the only one.  A few days later I told Kim I was doing it, running, walking or crawling, I was determined not to give up.

During this time I had also started to work my way off my medication, Sertraline, and I soon realised this was part of my problem.  I had worked from 200mg to 150mg, and then to 100mg; it was a huge frustration but I decided to go back up to 150mg and that worked enough for me to feel better and to get back out and running.

The marathon distance is 26.2 miles or 42 kilometres, and I was struggling to do half that….   I was using a honey energy drink that I had found on a website, which helped a bit on the long runs, and I ordered some Honey ‘Stinger’ gels for the race itself; I knew I needed to keep myself fuelled on the day. 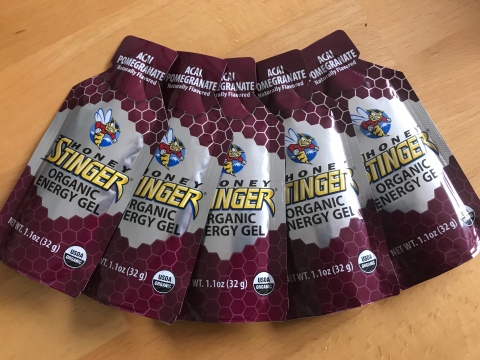 For the mind, I tried to focus on being mindful, focusing on my breathing and my feet hitting the ground, one step at a time, and to think positive.  I tried to get my body and mind to work as one, to use my arms and core to take some of the pressure off my legs.  I would vary my stride length to keep my muscles interested.  I pictured the cox in a varsity boat race and the way they shout at the crew to push and to work as one; my mind became the cox of my body, I would call out when I needed an extra push (generally in my head but if I was in the middle of an empty field I would yammer away out loud), I tried everything I could.

On my last training run I managed to push to 26k, which was my best ever, and I hoped enough to get me round; either way there was no time to do more, race day was 1 week away.

Race day started off in a bit of a rush, taking Leo out for a walk, etc but it sort of helped distract my mind from what I was about to attempt.

We arrived in Milton Keynes, parked the car and set off on the 25 min walk to Stadium MK, where the start was, which was a good warm-up and gave Kim and I a chance to try and relax (she was as nervous as I was).  We were about to make our way to the start when we bumped into David, the friend who had told me about the race in the first place.  Seeing David helped with my anxiety and the three of us made our way to the starting pens together until it was time to split up. 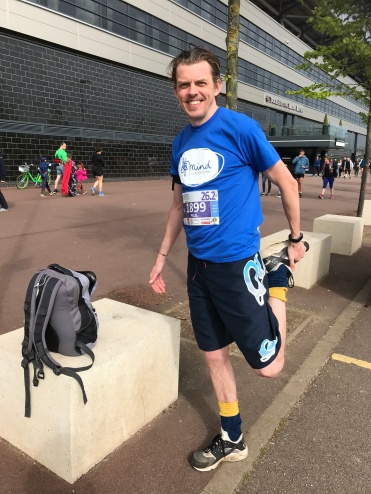 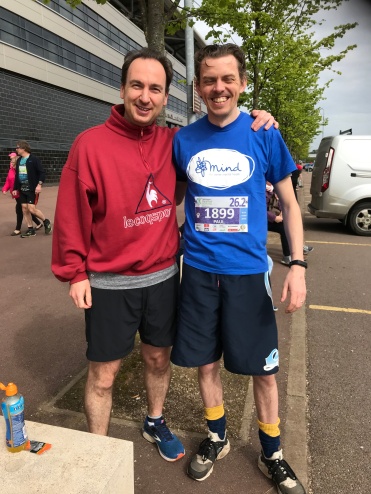 Standing alone in the pen amongst thousands of other people was a very weird experience; I wouldn’t say I felt anxious, it was more a dream-like state, my mind couldn’t really compute where I was, nothing seemed real.

Once I started running I tried to go into my usual steady pace; David had run the London Marathon the previous year and told me he wasted a lot of energy at the start by trying to get past people, so I decided to take it steady.  Lots of people started to overtake me and it was hard not to feel as though I was falling behind and speed up.  I think I had a funny smile on my face because it felt so odd running along main roads that were normally full of cars, I’d check for traffic as I hit a junction until I realised I didn’t need to.  I just tried to keep my mind on enjoying the experience and the tour of Milton Keynes.

The race went by nice and steadily, I spotted Sorrel (David’s wife and a close friend) at around mile 2 which was great.  Sorrel and Kim met up around mile 5 and it was great to see them before they headed to the stadium for the finish.

The distance markers seemed to go by quicker than I expected; I enjoyed the course, which was actually quite beautiful and I found it easy to focus on what was around me.  There were lots of people watching and cheering us on and a lot had bowls of sweets, which I took advantage of at every opportunity.  The only time I was concerned about my pace was when a lady in a Rhino outfit overtook me!

I was able to up the pace towards the end (sprint finish???).  The run into the stadium for the finish was brilliant, as was the final lap of the pitch.  Kim and Sorrel were in the stands and I saw them as I entered; David had already finished and was sat with them, which was great.

Crossing that finish line was incredible, and I was still buzzing when I met up with Kim (I think that was the sugar!).

I completed the course in 4 hours 35 minutes, which I am told is pretty good; to be honest I had no idea of the time so was very proud of what I achieved; 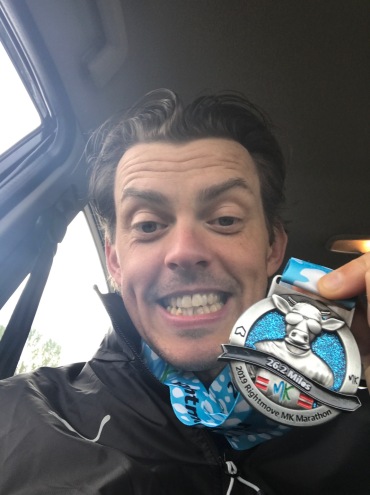 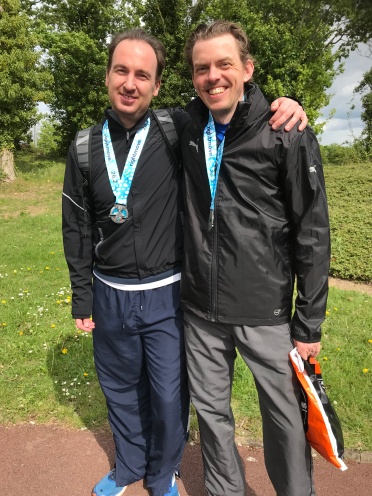 So, it’s onto the next challenge, the Hitchin Hard Half Marathon in June; I’ll let you know how I get on.

If you want to support my ‘Adventures of an Anxious Mind’ you can donate on my Just Giving page: